Which, to be fair, I should have been updating since day one, but my last post was up to Day 5, so you’ve only missed the weekend.

The weekend looked like a heap of white fabric, as I attempted to hand sew a camica in a week. (NB: That’s a dumb idea, don’t do it. My hands aren’t really speaking to me.) As I started it last Sunday, in theory a week would have been yesterday. That didn’t happen. I should finish it today (possibly tomorrow, depending.)

As I downright pined for something with colour, and as a giant foofy camica for someone of my size is entirely not portable, I also managed to get some knitting in. I figure I should have lovely knee high Eleanora stockings for sometime in the 2020s at this rate.  (So once the unending sea of white is done, I should have an unending sea of green.) 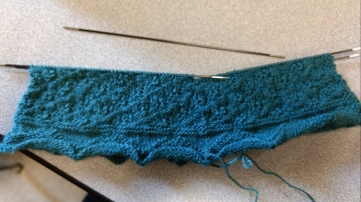