I came across this notion a couple days ago, and knew what I was going to write about for my Friday blog post. Baroness Ameline of Rowany in the Kingdom of Lochac has set out a challenge. It’s a challenge to her barony, presumably, and her kingdom, and but in the era of social media, these things sometimes go rather further afield and catch the attention of the Knowne World. 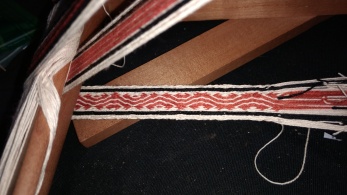 Her challenge is 100 days of A&S, and it’s based off the notion of a century drill as a combatant might do. At least 10 minutes a day of A&S, for 100 days. She suggests starting over if you miss a day. There’s a hashtag for it (#100daysofAS), and of course, now there’s a FB group for it too.

When a friend from Aethelmearc mentioned it to me, her words went something like ‘of course this would be like telling you to try and remember to breathe every day for 100 days in a row’.. and she’s not wrong.  I’ve been trying to get in the habit of not sitting down at the computer with my morning coffee, but sitting down at something creative. Sometimes it’s the lace pillow, sometimes the inkle loom, sometimes its sewing. Me and a podcast (or two) start the day. (Current projects are largely fueled by the History of Rome podcast)

I’m on day 5 (yes, I did backdate a smidge, but I’ve done A&S every day since March, and I wanted to start on May 1, cause it sounded nice!), and every day so far has been chemise sewing. Close your eyes, picture a big pile of white fabric with little white stitches. There. That’s been my five days of A&S so far. (I am so sick of white.)

Care to join me in the challenge?