I’ve lived in Guelph for over 27 years, and I had never stepped foot in the Art Gallery until this week. This is not a boast, if anything it’s a rather shameful admission, but at least I finally fixed it. What nudged me into getting off my arse and stopping by? A lunch hour talk by a local artist who uses medieval manuscripts as her inspiration, Debbie Thompson Wilson. I haven’t found a web presence for her, just a collection of things she’s been involved with. (I also learned that Guelph has a calligraphy guild. This wee city has a guild for nearly everything!)

I found her talk to be not aimed at me, which is very reasonable. A lot of generalities, a lot of not specifying the when and where, although I was quite sure based on her research that she’s probably aware of when and where. 1200 yrs of manuscripts is a wide range, but in an overview for a group that contained art enthusiasts rather than medieval historians, it was not bad. There was nothing that made me cringe (although I am not a scribe, so it’s really only whatever I’ve gleaned by osmosis from scribes.) It was very well received by the audience (and I managed to mostly keep my mouth shut during question period!)

It was interesting to hear many words I’ve heard before come from someone outside the recreation world. She uses vellum almost exclusively, she works in miniatures, she tends to use watercolour rather than pigments. Her work is beautiful, and any of our scribes could give her a run for her money. We are so spoiled, those of us who receive works of art of love in scroll format. Also, her wee portable palette was terribly clever. Bake some fimo with divots in it into a pretty tin. Done! 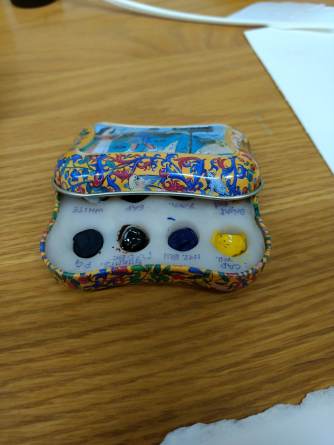 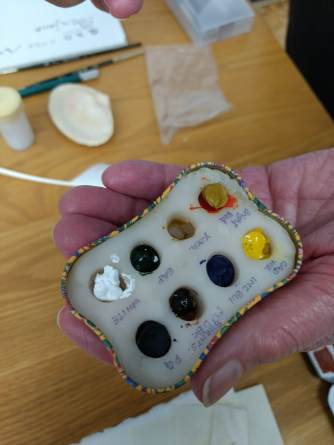 Her inspiration piece, what set her off on this tangent was owning an original bit of 16th century manuscript. Unfinished, and beautifully framed, she clearly treated it like the treasure it was. The eye candy was lovely, it was a great little distraction from a crummy week.

Slowly, oh so very slowly, I am healing. (Oh so VERY slowly.) Spindle spinning was the last thing I lost to the sore arm, and seems to be the first thing I’ve gotten back. I have to be gentle, break it up into shorter sessions, but still. It means that the cotton candy mystery fleece has FINALLY gotten spun up, and I’ve gotten myself going on a glorious 120g of Lincoln, which should last me a while at the rate I spin. 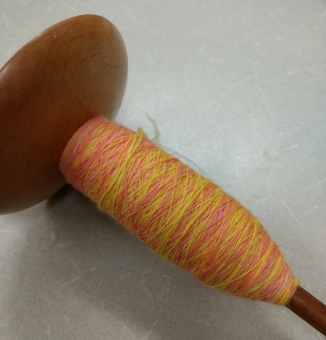 The cotton candy fleece was a gift in a dye exchange approximately forever ago, and got a bit felted somewhere along the way. It fought every step of being spun, and got used to show people how to spin, and in the dark, and when I was half asleep and perhaps had a couple too many now and then. Consistency is a bit of a not thing with this chunk of yarn, but that’s alright. Everyone’s life will go on just fine. Most string things are surprisingly forgiving, all things considered.

I decided I wanted it 2 ply, in theory to help even out some of those inconsistencies, and to use up every last bit of the ‘not much’ I have, I chose to Andean ply. In short, make a centre pull bracelet and grab each end and ply all the way through. Traditionally, one wrapped it around their hand to accomplish this, but it quickly ends in all the blood being cut off from a finger, and no ability to set anything down if the phone rings. So many clever people on the internet have ideas on how to improvise. Some cardboard and a freebie pen later, and I win!

Plying has begun! It will take me a while to get through it, but that’s alright, there’s nothing wrong with working with sunny coloured singles in grey grey February.

At Birka last weekend, I got to chat, and pick up supplies from an Aethlemarc soap maker (Mistress Elska), which meant that the bonus day off I gave myself once I was home, I got to play with soap.

I decided to take three plausibly period fats (beef, pork and olive oil), and make soap from each using modern lye to have an idea on how each fat makes soap differ. Most modern soaps are a blend of all sorts of fats, but before I start playing with my own blends, I want to meet each of them individually. Because I’m also entirely too fond of compare and contrast, I also took each batch and split it after I got to trace. One half straight into molds, and the other half got cooked down.

I absolutely overcooked the beef tallow soup, I fear I might have undercooked the pork lard soap. I expect the cold process soaps will provide the best comparisons, but I need to wait 3-6 weeks for those to be ready.

The lard soap was /so/ hard to get to trace. I rendered that lard myself, so I do wonder if it’s not quite pure, or something.

Now to wait! All of the soaps will be at Kingdom A&S in March to compare.