Apologies for the pause in posting, I finally did something obnoxious to my elbow (aching is normal, sharp pain is not) and it has ground knitting to a halt. Actually it’s ground a good many things to a halt, including work while I spent the afternoon yesterday in various waiting rooms (Dr office, lab for blood work, x ray place, pharmacy, bus rides to and fro.. blah.). Without my knitting. Women’s magazines (by and large) are really insipid and I should get more games for my palm. While there was no specific prohibition against knitting, everything hurts which makes the attention span even shorter than usual. So, in lieu of awesome sweater photos, I went digging in the photo stash for something else. (I have no illusions that anyone’s here for the writing.) *grin*

Back in November, I was off work a day and got the idea to try using up some Crystal Lite drink mix for dyeing. I wasn’t entirely sure how the fake sugar would affect things, and as I won’t drink the stuff and my husband’s moved on to different fake flavours in his beverages, I figured on using the the last of it in the dye pot. This is, for the record, that single serve in a water bottle sized packets. I use a crockpot for nearly all my dye work. I really /like/ being able to walk away and know it’s at a constant temperature, and it equally helps me keep my dye pot separate from food pots. My only wish.. that it was bigger. It’s a 4 litre (quart?) pot, and doesn’t hold nearly enough for anything but healthy sized samples. Fortunately, I tend not to be aiming to dye enough for big projects and am very fond of colourways rather than uniform colour. Alright, so a couple packets (This was 3 months ago, I don’t remember specifics) of Raspberry Ice into the pot, a dollop of vinegar and (purposefully) balled up reclaimed yarn. 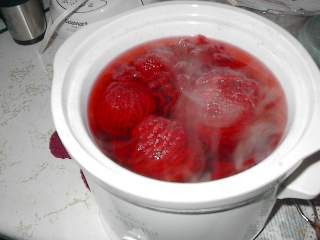 I left the yarn in balls specifically to get different depths of shade from the dye penetrating the ball of yarn. I did mention that I’m not much for uniform colour, right? The absolute worst part of this experience is skeining wet wool on my pvc niddy noddy such that it actually can be properly rinsed and dry all the way through. Ew ew ew yuck yuck. The next batch was uhh.. tangerine? Some orange flavour, and therefore, orange colour. This one, for whatever reason, did not want to penetrate the ball of yarn. Just would /not/. Three times I dug it out, skeined some off onto the niddy noddy and plunked the rest of the ball back into the dyepot. As I recall, I dumped some wiltons in to get vaguely the same colour as I just did not have enough packets of drink mix to get it all dyed to any sort of colour.

Yes, I know, even food safe dye should be careful with other clutter on the counter. I live on the edge. Welcome to the clutter of my kitchen, it matches nicely the clutter everywhere else in my life too.

After far too long skeining wet wool (ew ew ew), these are three of the final skeins drip drying away on a dining room chair covered with tea towels (and with a tea towel on the floor. I should have covered the entire floor, skeining wet wool seems to send water everywhere, whodathunkit).

Someday I’ll even decide what to do with the skeins. Perfect for felting, I’m quite sure. Oh.. and as always, I toss a handful of fleece into the dyepot at the end to pick up the last of the colour, I’ve something against tossing a not completely spent dyepot. 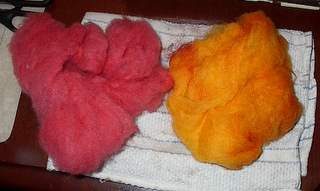 One thought on “Pretty colours!”