I’ve been teasing this project out on the book of faces and on instagram all through the progression of it, enough that I get surprised when I mention it as just ‘the peacock’ and someone is ‘uhh.. wtf are you /on/ about’. Social media, not always very social. But anyhow.

This project is over 20 yrs in the making. Allow me, if you will, to ramble a bit about the Good Ole Days ™ on the internet, aka the late-90s. It was a time when finding anything was /hard/. Google wasn’t yet a thing, but putting up a webpage, if you were at all technical, was pretty easy. Running a mailing list was very much a thing, most of us were some form of academics (students, staff, faculty) and the world didn’t much care what the weirdos did with the university computers as long as it didn’t break anything. Usenet was a thing, and most of us knitters found ourselves, at one point or another on The Knit List. It was THE list. A listsrv that required just having faith in arcane directions to join. It was where all the knitters of the internet hung out, and there was everything from ‘how do I start?’ to ‘I am knitting guru, and here’s some of my latest design work’. I fell into that first camp on the knit list, just so we’re clear.

Regular posters to the knit list became early internet superstars (very much like the ‘fame’ of costumers who are on YouTube these days. #Costube etc.) and I hung upon their every word and project. They were amazing, and one in particular was crazy. My sort of crazy. She knit tiny before knitting tiny was a thing, and I wanted to do that SO BAD. Not only did she knit tiny socks, and a tiny bag. She had knit doilies. A peacock doily. She noted that she’d used piano wire to make her needles and sewing thread for her yarn. I went out and found 0.3 mm piano wire (dutifully following her comments to the letter) and picked up a spool of navy blue thread from the stash to make a sample. 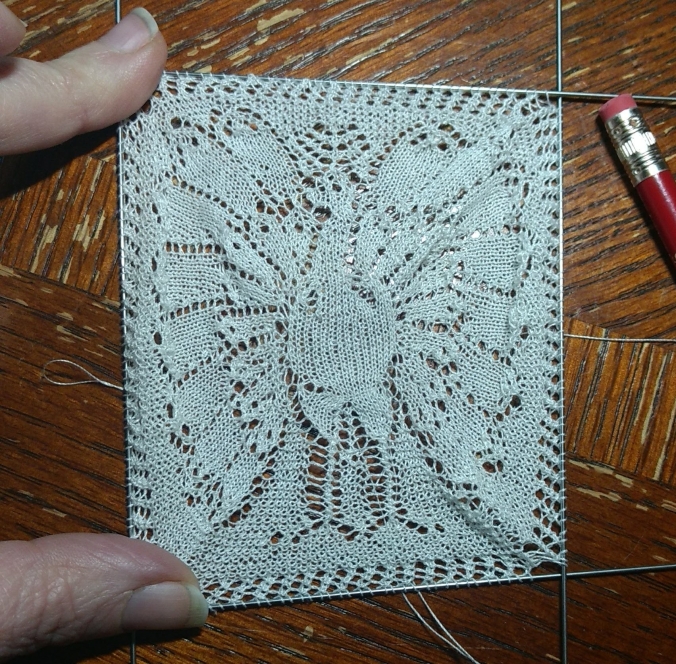 This was, in a word, a nightmare. That blue thread? Faintly fuzzy polyester of the ‘3 spools for a dollar!’ variety. Navy blue. About as easy to see as finding a black cat on a new moon night in a mud puddle. I never did get nice points on those damn wires, and it caught with every other stitch. I am notorious, legendary even, for having bulletproof tension. I was no different then, and even for sewing thread, I probably should have been up in the 0.75 mm or 1mm needles.

I knit a wee thing about 2 inches by 2 inches, determined that it was 36 stitches to the inch, and when we were packing to move almost 10 yrs later? Threw it in the trash. (I have regrets now, but at the time? It felt cathartic.)

But that peacock doily? I kept the pattern. Not only did I have the original pattern (found at a junk store back in those knit list days), but I had the reprint in one of my lace knitting books. And I was determined. The swatch may have been a hot mess of awful, but the doily.. that should be fine, right?

Reader, it was not fine. Terrible thread (at least I’d moved to a light colour!) and worse needles did not make a complex lace pattern easier than a swatch. I didn’t make it past half a dozen rows, ripped it all out and shoved the pattern back on the shelf.

Fast forward, and I join the SCA. And I discovered more people who are quite reasonable about tiny knitting. And by now, I have acquired more than 20 years worth of knitting experience, and knowledge about thread, and some rather lovely tiny needles, and find myself in need of a distraction project. Thus, the peacock got another crack. An ode, perhaps, to how far I’ve come since the days of that hideous thread and those poor little wire needles.

Early in my bobbin lace learning, I bought myself a rather nice spool of cotton. (Brok 32/2 for those keeping track at home), and it’s been waiting for just the right project. This seemed like the time to break it out. I tried it with 0.75 mm needles (I know what tension is now!) and it was too tight, so 1.0 mm needles (5-0 for the Americans) and that was just about right. I am not going to say that this was the easiest pattern I’ve ever worked. There was language at a few spots and there’s a whole section that is just a mess of picked up tiny stitches and knit 3 togethers that is a nightmare at this size. I took off my glasses to get closer to see what was going on, and poked myself in the face with needles sort of miserable sections. The Interweave reprint has errata no longer easily available on the internet (thank you wayback machine) and even IT is wrong. Thank goodness for having the original available to refer to.

Most who, back in the day, knit the peacock in tiny (it was a /thing/ amongst a few crazy folks), stopped after the peacock section, and called it good enough, but I rather liked the extra border to make it a square, so I decided to do the whole thing. I have no regrets. It’s just about exactly 8″ square, and ultimately it will be tacked down to fabric, framed and hung on the wall. I’m not wholly delighted with my blocking, I might yet block it again, but for the moment, it is done.

4 thoughts on “The Peacock”