Phew. We made it to a new calendar! Go us! I’ve also been sick for the entirety of the holiday break around here, so that carefully collected list of things I wanted to do while I was off work? Yeah, not so much. Video games and naps punctuated by social obligations, which required more naps. (Civ VI is my video game crack of choice, thanks for asking. Thank you Steam Winter Sale for providing the most recent expansion at 40% off.)

2019 was a year of expanding horizons. Unwillingly at first, as I had to find something I could do with a rampaging and frustrating bout of tendonitis. (Mostly gone, not wholly gone. I overdo it regularly and then have to wait to heal again.) That’s how beer and soap came into my world, and I do enjoy both. I have had successes at both, and failures at both, but I admit that neither are my One True Love ™. Enjoyable past times, but not my one and only. I do both because I like having soap and beer, so they’ll turn up again. I have wood ash to make my own lye again, but that’s a task better suited to outdoors, so look for that once the weather warms up.

There was a lot of spinning in 2019, although that was also the year that I learned that I can no longer treadle a spinning wheel. The damage in my legs and the motion of treadling do not play nice, not even a little. Fortunately, I started as a spindle spinner, and it’s always been my preferred spinning love, it’s just not terribly quick. I added in a wee tiny electric spinner, but honestly? I am just as fast on my spindles, so my little nano doesn’t see a whole lot of use. Practice would probably fix that, but I adore the portability of spindles. Look for a whole lot more spinning out of 2020, because it is zen and <3.

I honestly thought I’d done more weaving than I have, perhaps just the looming of the looms makes it feel eternal. I got some black wool woven up on the floor loom for an exchange gift, and then a single electric blue warp off the warp weighted loom. There’s another warp on the loom currently, but I kinda hate it and am uncertain what I want to do with it, or where to go next, so it sits while I muse on that. I have so many things I want to weave, and I admit, I’m being held back by ‘what if they go wrong!?’, which is frankly ridiculous. What if they go right? (Well and the 4 shaft floor  loom is currently utterly buried behind the 3D printer, that’s a whole different challenge.)

There was some hand sewn garb, and some machine sewn mundane wear, and honestly, I really do want to make more of both. I need to figure out how to arrange a sewing space, as I don’t find it particularly portable and I don’t have a space at the house that doesn’t need to be put away at least once a week, which I am finding utterly tedious. More solutions to be had in 2020, but I don’t yet know what they look like. I find making clothing terribly intimidating (yes, even still) and there’s exactly one way to solve that issue. Make more terrible clothes, and each will, ideally, be less terrible than the last. A solution easier typed out than implemented, but we’ll try. 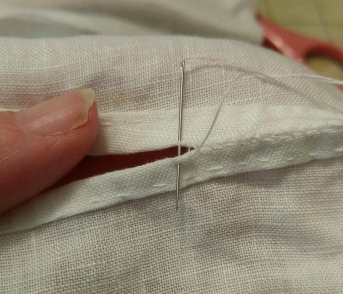 2019 saw other bits and pieces tucked into it. I tried painting on silk (hated every second), and painting on a wooden box (that was rather fun!). I did do some knitting, stupid and otherwise. (Okay, a lot of stupid knitting), and the year ended with enough stupid knitting to have a sore arm, so there’s a pause on the knitting for a few days. Some yarn and fleece got dyed, and no doubt more will get dyed in 2020. That’s an enjoyable afternoon making colours, and I don’t foresee that ending anytime soon. 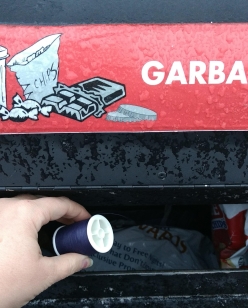 What the 3/99 cents thread deserved and got.

What 2019 didn’t have in it was much in the way of lace (other than knitted), or embroidery, and I missed both terribly. Stay tuned for glorious plans about that coming up in 2020. I’ll tell you all about it on Monday.