So, the world has gone crazy for sourdough. Which is cool, and honestly pretty awesome all in all. I’ve played with sourdough before, and I’ve had some failures and some success and every time I go out playing with sourdough, I learn more. This time, no different.  This is a collection of brain dump items that I shared with a co-worker who was working on his first starter, and I’ve no clue if any of this is useful to anyone else, but he found it interesting, so now I’m sharing it with everyone. 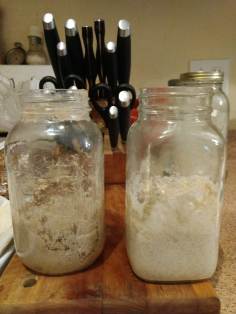 I don’t fuss too hard about what flour I’m feeding Fred. (Fred’s my usual starter name, I have had Wilma in the past, but I’m back to Fred, I don’t know why.) All purpose, whole wheat, rye. Those are usually my choices, and it seems to be whichever is closer. This house is fully glutened, so I have never experimented with GF flours.

Guelph water is only chlorinated, not treated with chloramine. Lemme pause here for a quick chemistry lesson, I promise it won’t hurt. There’s two main ways that city water can be treated to kill off bacteria, chlorine and chloramine. (NB: it is not the same chloramine as in swimming pools.. do not try this at home.. related but not the same.) There are other options for killing off pathogens in water, but those are the two most common in cities. While most use chlorine to disinfect initially, it is the wee bit of residual disinfectant that we care about. Chlorine is quite volatile, it doesn’t really want to stay in the water, it has places to be and things to react with. Chloramine is a much more stable molecule and hangs out in the water allll the way from the treatment plant to your tap. Now, we are attempting to start a yeast farm here, and by rights, that disinfectant that is trying to keep the water clean and safe is also kinda trying to kill our yeastie beasties. By and large, there is not enough residual disinfectant to cause huge problems, unless your tap water smells like a swimming pool. (If it does, I expect you’re not drinking it either.) That being said.. chlorine is volatile, and if you let a clear jar of water sit on the counter for a few hours, it arses off. Chloramine does not. I emailed my city’s water department to ask them which they used (This website has a chart for Canadian cities,  but they are trying to sell you stuff, so take with salt as needed, you may want to just email your public works department) and Guelph uses chlorine. So I just have a jug of water that sits on the counter and my plants and yeasties and cat gets that.

I feed Fred once a day, generally and equal parts flour and water. That keeps him at 100% hydration (What does hydration mean? It is what ratio is your water to your flour.. and hey look.. mine are the same.. 100% water for my flour. It’s the most common if you’re looking at technical sourdough pages.) You can measure your flour and water by weight (my preference, but that’s how I bake as well), or by volume. Up to you. I only discard when he’s getting too big for his jar, otherwise I feed him up to have enough to bake a good batch of bread from and still have some left over to continue Fred. There are oooooodles of recipes online for what to do with sourdough discard, but I throw it in to muffins as often as not, or fry it up as griddle cakes, rarely does it hit the compost. It’s just flour and water and some yeasties in there, there’s no reason not to use it somewhere you need flour and water. If there’s a weird layer of liquid on top, that’s alcohol and you can mix it in or toss it. (I toss it, I don’t care for the taste, but it won’t hurt you.) and it’s a sign that your Fred is going too long between feedings.
​

Yeastie beastie like to be warm, but not tooo warm. (They are very much like me in that regard, actually). Where Fred lives needs to be in the 20s C, and honestly.. my house isn’t from about Oct – June, so he usually lives on top of the fridge or on top of the router (make sure he’s got PLENTY of room in his jar before putting any jars of goop on computer equipment), or in the oven with the light on. I seriously thought about getting one of those plug in mug warmers, but I thought that might be too warm for Fred. This is a major spot I’ve struggled with, and too cold for too long has mucked with my starters in the past. Keep Fred cosy!

​When it comes to baking with sourdough starter for yeast.. it’s all a waiting game. Timing on recipes are vague guidelines. Your yeasties will take as long as they need to double your dough, and they didn’t read the recipe to know what it said. I like two rises, and I don’t generally stick any in the fridge, but my house is cold enough already. Accept that you are going to be eating a lot of bread while you figure out what your favourite baking style is, and that’s it’s a good and delicious thing.

Sourdoughs are mostly really forgiving. If they get pink or green fuzzy bits, they are compost. That means the turf war between bacteria and yeast went to the wrong kind of bacteria. There are good guy bacteria in there too, they provide the sour flavour (IIRC.. this is where my research is sketch, so correct me if I’m talking out my butt), but really you aspire to keep yeast happy enough that there’s just not /room/ in there for the other guys. Stirring is good, yeasties like oxygen, the sour making bacteria do not, so it might keep things milder too. (This is all WAAAY oversimplified, eventually I will get myself together to do a fermentation class as part of my modern alchemy series.)

I really like the King Arthur Flour site about sourdough: ​https://www.kingarthurflour.com/learn/guides/sourdough
I really like their site for most baking things, actually. Clear, scientific based information and the recipes have been tasty too.
I turn to Serious Eats a lot for other things and they did a day by day starter-along a few years back: https://slice.seriouseats.com/2010/11/how-to-make-sourdough-starter-day-0.html
If you’re interested in current sourdough research, there’s a woman looking for information about your starter: http://robdunnlab.com/projects/wildsourdough/
Most of the internet currently is waxing poetic about starters and sourdough everything, give it a go! Eat more bread!
Any grievous errors, let me know!