Kingdom A&S. One of my (unsurprising) favourite events of the year, and because the world is trying to end itself, we’re not there. It should be tomorrow, I should be madly packing and anxiously waiting for the workday to end so we can get on the road, and only one of those things is happening. (Work from home does not make the anticipation of the weekend any less, I’m discovering.)

However, I was going to show the world the current state of my embroidery sampler for the year, three months in. And then I realized that I haven’t even shown the blog the finished pieces for March, or February! Hard to believe that it’s 1/4 of the way done, although I need to get my skates on to pick something for April. Did you know that’s NEXT WEEK!? YIKES!

There we are. The first three, hanging out side by each. I have not yet decided how I want to display all twelve when they are done. I suspect one big hanging of some sort, but honestly, where would I put it? It’s why they haven’t been finished off more than this, because I don’t know what to do with them.

Derpy deer in his final glory.

The one I’ve learned the most on was derpy deer. Appliqué is totally new to me, and it had the steepest learning curve. The next two months were techniques I’m familiar with, at least in theory, so while it was a new pattern, or a variation on a theme, it was familiar.

Fastest by FAR was March’s canvas work. It took me a week. I can absolutely see why it’s a great choice for covering walls with, it goes so incredibly fast. Get that first pattern line in, and then it is absolutely mindless follow the yellow brick road along. It was also the one I’ve enjoyed doing the least, probably for exactly that reason. (Although in the current mental climate of uncertainty and chaos, I’d probably welcome it, so take that for what it’s worth). 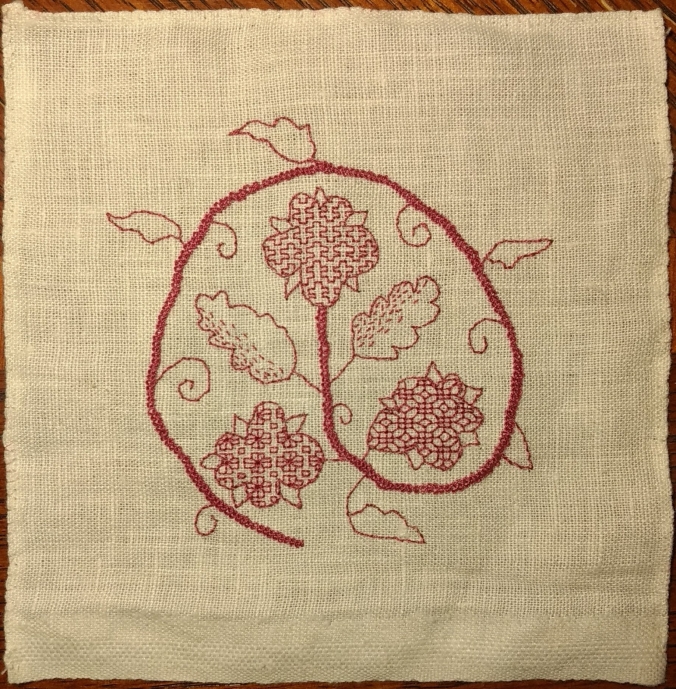 I love finished derpy deer, but there was language and freak out on the way through to get there. Blackwork was just.. blackwork. I surrendered on plaited braid stitch and just went with normal braid stitch, which I think was a good call at the size I was working at, but now I do have an embroidery stitch nemesis to reload the boss fight on.

Next month is couched work, and I think it’s going to be Bayeux stitch, named for the tapestry, and if you name the stitch after the tapestry, it would be silly for me not to pull my inspiration FROM the tapestry itself. Stay tuned for that!