We’re back for more ways I did terrible things to my madder dye pots in preparation for March’s canvas work. None of these are the end of the world, clearly.. spoilers.. I got dyed fibre in the end. That being said, I absolutely did not follow best practices.. kinda. More on that shortly.

First off, more about mordants. (I love talking about mordants, I mean.. I teach an entire class just about mordants, not a dye molecule in sight, just getting things ready.) Anyhow, it’s an important step. It’s laying the foundation for everything and a lot of people, especially newbie dyers (and those of us who tend towards the impatient <cough>) spend a lot of time asking ‘Do I need a mordant? Really?’ Assume yes. If you aren’t sure, mordant. The dyes that are substantive and effectively self mordant won’t mind, and it’s good practice. It should be the default, not the exception. If you tend to use a lot of a certain kind of thread, mordant more than you need. Then, when you are impatient, or a friend says ‘hey, I’ve a dyepot going, wanna toss something in?’ (happens more than you think in certain circles), you have it ready and waiting. The mordant makes a chemical reaction with the fibre molecules, that’s the point of the process, it’s fine to get dried out and wait for your next dye day. (The dyes that don’t generally need a mordant are usually full up on tannins all built in, just in case you were wondering.)

By the same token.. experiment! Toss a mordanted skein of something and an unmordanted skein of something in the same dye pot. How do they differ? How do they differ in 6 months? We want this to be an exact science, but it’s not. The dye stuff, and the fibre itself are natural products and change year to year, growing season to growing season. There are trends, and generalities, but sometimes.. dye pots do whatever they darn well please, and we appreciate the colours they give us, even if it might not have been the one we were expecting. (Sometimes that appreciation takes a few days.. weeks.. to develop. <ahem>)

So when last we left our hapless skeins of yarn, they’d hung out in a mordant bath all day, while I went off and did things that get me a paycheque (I am fond of those paycheque things). I pulled them out of the mordant bath, and tossed them into a bucket to wait for me. I was planning on using them right away, so no need to carefully dry them out, and honestly, I was fine if some extra water and mordant hung out on the skeins (Sometimes mordant molecules don’t find their home with a fibre molecule.. it’s sad, but it happens. A missed match in the love lives of molecules.) While the skeins were hanging out cooling off in the big dye pot, the little crockpot was cooking away all day. 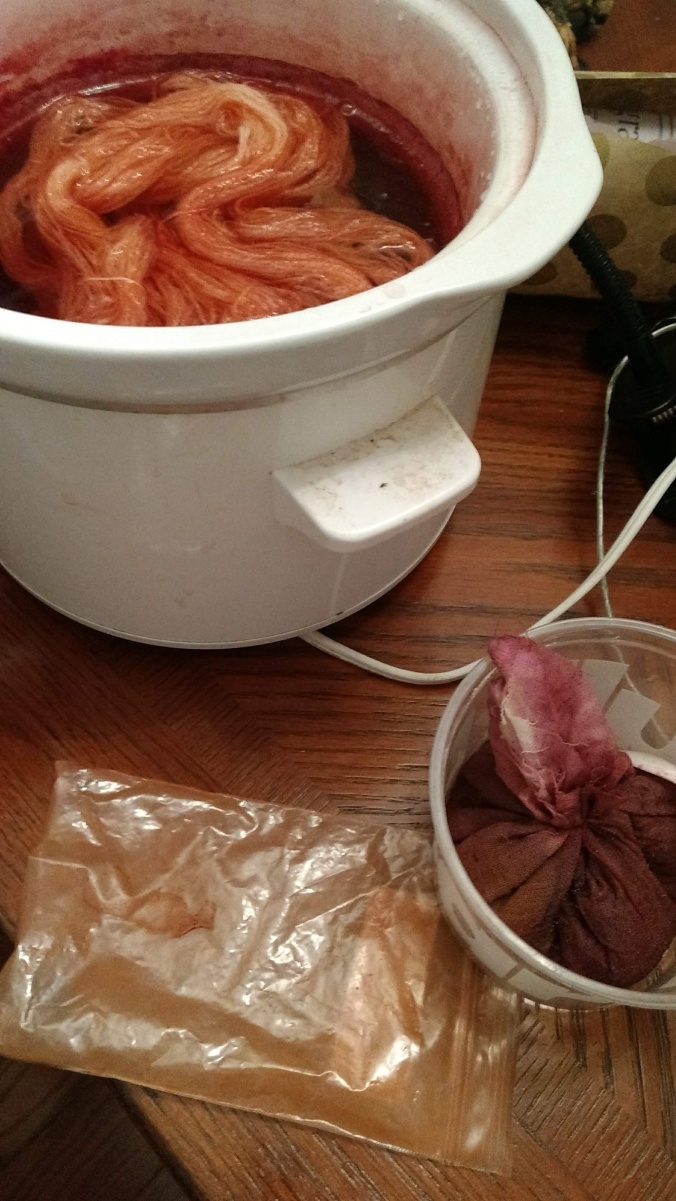 I am notorious for not gathering up my dyestuff into a little fabric baggie to keep it contained, and I did that this time as well. The last of an elderly (although at that point, I’d rather forgotten how elderly) package of madder (about 40 g) into a crockpot of water, put on low and away I went. A crockpot on low sits at about 200F, just a shade below the boil. (Thank you Edith for hunting that up for me). Madder shifts towards the browns at 160 – 180F. (Did I mention the lack of exact science? Right. Exhibit A.), and I was alright with getting browns. I rather like the red/brown that hot madder gives, and my dye crockpot doesn’t have a keep warm setting, and I wasn’t going to fuss with a sous vide water bath, or babysitting it to keep it warm, but not hot. Brown is lovely. Yay brown. It got to sit in the crockpot all day, and then I strained it through a scrap of cotton cloth into the dyepot when I got home. Like making stock for soup.. the liquid is the bit you want. Ask any dye worker (or cook) and you’ll find someone who has once.. just once.. absently drained some or all of what they wanted down the sink. <sigh> But not this time! Hold onto that strained stuff too, tie it up into a packet like I should have done to begin with. It goes back into the crockpot to get simmered again (hey.. could have more dye molecules left in there!), the dye liquor now is safely ensconced in the big dye pot.

This is, or should be, the strongest colour you’re going to get from your dyestuff. It’s the first extraction, it should snag the most dye molecules (even if they’ve been shifted brown cause lazy crockpot). Top it up with some water, toss in some mordanted fibre and hot it up. This time, I really did just get it to hot and then turned it off and left it to cool all on its own. You can just let it stay cool and ignore it for a really long time, but your dye molecules are making a chemical bond with your mordant molecules (who have already made a bond with the fibre). That reaction happens faster when things are hot. 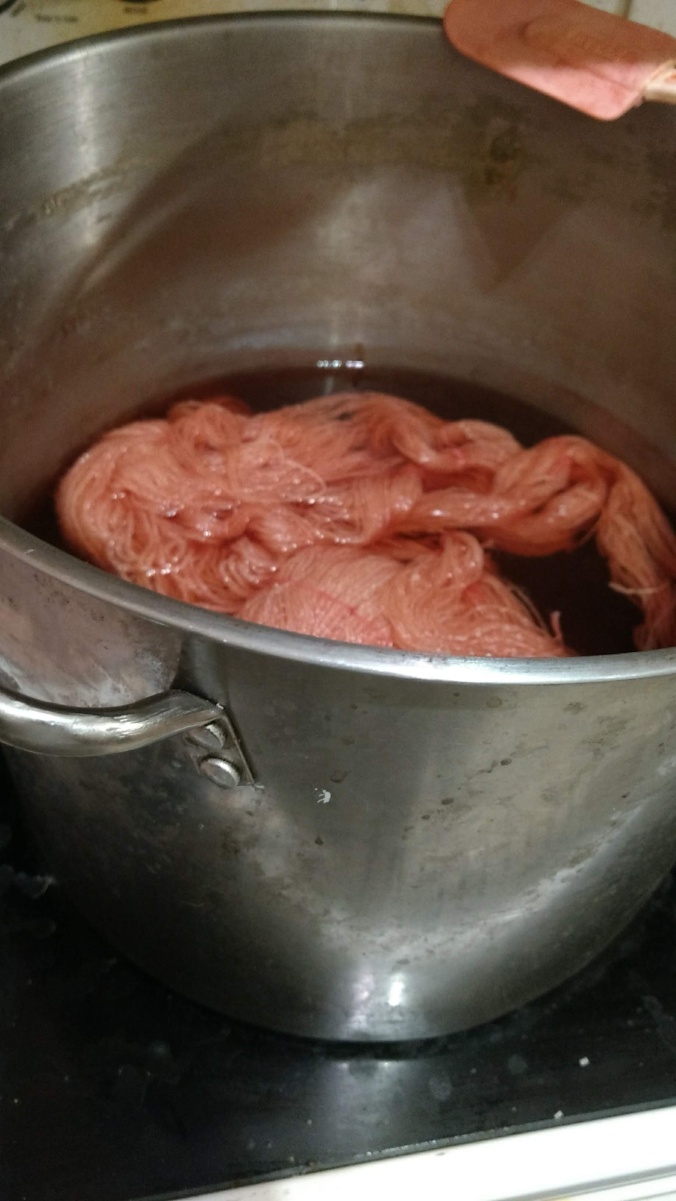 There’s a few important notes in here. Your dye pot needs to be big enough to let everything float around with space in there, otherwise you will get splotchy spots. This is a grand dance of dye molecules surfing the room looking for a best beloved with a mordant molecule and relationships rarely bloom when you are nose to jowl with a pack. Wool likes consistency, if it’s going into hot water, it should already be warm at least. If it’s going into cold water, it should be cold. Wool doesn’t like getting roughed up, especially when its wet. Gentle swishing. Silk doesn’t mind the temp changes, and it’s moderately robust against swooshing, but it doesn’t like getting too hot, it wants to stay under that 180F as well (80C). Fibre should already be well soaked, or else the dye will strike differently on dry fibre vs wet fibre. The mark of a good dyer in history was not the funky dye effects that are popular in hobby dye now, but having a perfectly even product.

I generally leave it in the dyepot for a few hours, because otherwise I yank it out immediately which is fine in some cases, not fine in others. This time, I left it overnight, letting the dyepot cool off on the stove naturally. Rinsing is up next. This is where wool is the most fraught. You want to make sure to wash the wool well, but the water temp needs to be pretty much exactly what it came out of, and you need to not agitate the wool too much. Gentle! Gentle, gentle, gentle. Either pull the wool out of the container you are running water into, or run the water on the side without the wool. Gentle swoosh, or just let it sit. Squeeze lightly, or not at all. The adage I’ve always worked under is that one rinses until one is willing to drink the rinse water. Then you know it’s clean enough. You want it to get all of its running over with now and not when it’s made up into a finished piece and it rains. Or you spill a cup of coffee on it and it needs a bath. This is the time to solve the dye running issue. If it never stops running dye, you need to keep rinsing, or brain storm a new way to convince the dye to bond with the fibre. (That’s a whole different post.) Tah dah! You have dyed your fibre, hang it up to dry (I used to use a drying rack in the tub, but my drying rack turned out to be the perfect size to hang sausage off, so now I have a much smaller rack that fits in the tub. I think it was supposed to be a shoe rack at the dollar store.)

But wait, I can hear you say, there’s still colour in the dye pot, and the little bundle of madder dust has given a wee bit more colour.. yes there is! This is when you start tossing more skeins in and getting the paler colours, as there is less and less dye left in the vat. When you started with a darker red/brown, now it’s more peach, or pink, until you’re getting the most vague blush and then it’s time to toss the bath. At this point, you could pop them into an afterbath to modify the colour, which I did with one. Some iron sulfite into water (a more period route is to let metal hang out in tub of water ’til it’s good and rusty, or simmer it in an iron pot for a while, I went the modern route), let the dyed skein hang out there to have iron molecules mess with things a bit. Iron makes colours ‘sad’, sort of dulls them out, which is a nice shift when you’re looking for shades. 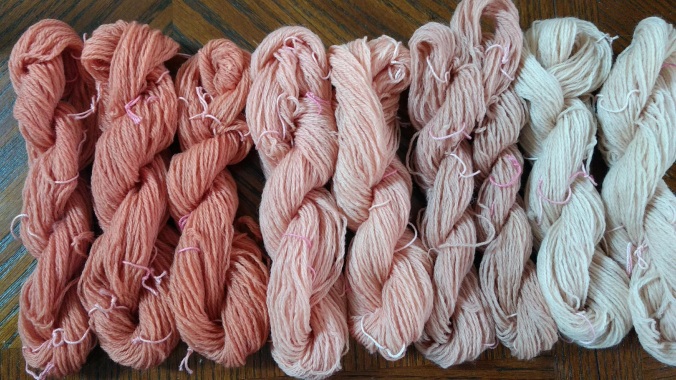 I got pale (for madder) colours, even on my strongest bath, because my madder is elderly. Like ‘could start school’ sort of elderly. I combated that somewhat by simmering the snot out of the poor stuff, but it shifted colours, even from when I used it for my pent a few years ago (yes, same batch of madder, and it wasn’t new then!). There’s a good reason why madder is one of the most common and popular dyestuffs, it is versatile and even when you are a complete jerk to it, you still get pretty colours that are fast. They don’t budge much.

I harp a lot about not using random stuff to dye with, because for my time at a dye pot, I want something that is going to give me good colour and be pretty solidly light and wash fast. In my early dye days, I didn’t care.. I tossed anything and everything in to see what happened? You get a lot of terrible yellows that fade quickly, but that time built skills and taught me a lot of things, even while I got fugly yarn. If you’re starting out.. experiment! Make ugly yarn, you can always overdye it, but know that for those working in a professional environment as a dyer, they used the tried and true that was worth their time doing.