So those who know my crafting predilections, know that my happy place is putting holes in things on purpose and playing with tiny string. Usually it’s thin cotton, or linen, sometimes wool or silk. Pre-SCA, I tended to kick back with knitting doilies and table clothes and now .. well.. now I try everything, and weaving seems to have taken over much of my time, but that’s besides the point.

It’s been a stressy few months, for a variety of not dire reasons, but that doesn’t make it any less gnngargh in the moment and with not a lot of brain for taking on new things. So I turned to my one true love. (It didn’t hurt that I was trying to come up with an ornament to make for a lace guild exchange, so I was happily surfing small knitting lace patterns.) I found a little doily chart that was super basic, but cute enough. (Promenade for those following along at home.) A variation on a very classic spiral piece, knit from the outside in, which is unusual. (Not sure I’m a fan, but that’s neither here nor there.) 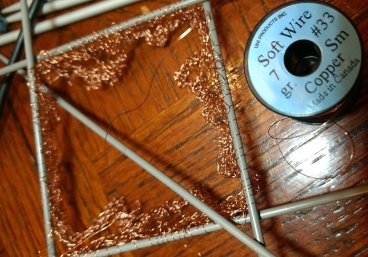 I decided that cotton was enh, fine, but enh, and then remembered that I had a small spool of copper wire that I’d acquired for wire weaving. Y’know, the stuff many in the SCA make lovely metal cords from, that I don’t love doing. I tried it, of course I did, but others love it more than I do (ditto with naalbinding for that matter) So clearly the only thing to be done was to knit a small doily out of copper wire. Because that’s what I apparently view as good stress knitting. (my tendonitis disagrees)

There’s something very satisfying about knitting lace that doesn’t need blocking beyond yanking it into shape, and I did learn that apparently when your tension goes funky you /can/ snap copper wire doing a knit two together. But hey, it’s not going anywhere, just squish that busted stitch in and move on.

I did find a lace pattern for my ornament exchange, so hopefully I can have that for you soon, as well as more silly ornaments. Apparently November is for tiny bits and pieces sort of knitting.

One thought on “Tiny Stupid Project”