I’ve been gorging lately on library books, many conjured up from the far reaches of the province (and beyond!) thanks to the University Interlibrary Loan system. While I have them for an all too short period of time, I thought I’d highlight some of them.

This one in particular has been coming up in the references of so very many papers I read, and I finally tracked down a copy. It’s the proceedings from the North-European Symposium for Archaeological Textiles (NESAT) held in Edinburgh in May of 1999. Edited by Frances Pritchard and John Peter Wild, published by Oxbow Books in 2005. (ISBN: 1 84217 162 3)

It is comprised of 24 short papers that were presented at the symposium. Most are in English, but not all. (5 are in German. I think. Looks like German? My language skills suck.) They range from a discussion about brocaded tablet woven bands, to the Textiles of Seafaring, to a preliminary classification of loom weights and a look at gender roles in textile production during the late Saxon period. This is not a how to book, this is a book of academically rigorous papers, full of solid bibliographies and references, and light on the pretty pictures. 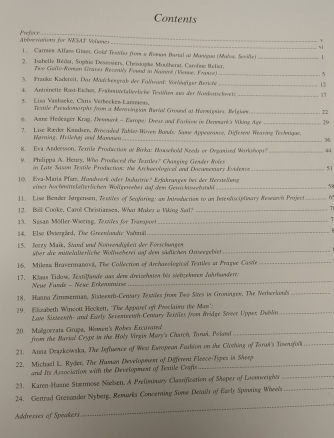 Personally, I’ve been appreciating the article on loom weights (A Preliminary Classification of Shapes of Loomweights by Karen-Hanne Staermose Nielsen) and an updated article about the evolution of sheep fleeces by the major name in fleece history. (The Human Development of Different Fleece-Types in Sheep and Its Association with the Development of Textile Crafts by Michael L Ryder).

I have to say, even just flipping through it again to write this review, I’ve settled in to re-read a few articles, and continued to enjoy them. They are strongly skewed towards early period, Roman, Saxon, Viking Age, there’s only a couple touching on sixteenth century textiles.

This is, to me, a book that is handy to have library access to, but it is not a must own for everyone. I would appreciate having it, but I’m a bit of a research geek, and having it to hand to reference would be super handy. There’s good reason I see it cited in so many papers, there’s a lot of solid information in here for textile geeks. It will not help you figure out how to weave, nor provide suggestions on why your tunic doesn’t look like the picture. It will give you reason to say ‘ah, I was aspiring to higher authenticity, and I aimed my thread to be this size, because of this find.’. For some people, myself included, that’s valuable, but you may not be it’s target audience, and that’s fine.

I appreciate having access to it, and I wish I could have easier access to it (local library rather than ILL), so thumbs up from me!