I’ve lived in Guelph for over 27 years, and I had never stepped foot in the Art Gallery until this week. This is not a boast, if anything it’s a rather shameful admission, but at least I finally fixed it. What nudged me into getting off my arse and stopping by? A lunch hour talk by a local artist who uses medieval manuscripts as her inspiration, Debbie Thompson Wilson. I haven’t found a web presence for her, just a collection of things she’s been involved with. (I also learned that Guelph has a calligraphy guild. This wee city has a guild for nearly everything!)

I found her talk to be not aimed at me, which is very reasonable. A lot of generalities, a lot of not specifying the when and where, although I was quite sure based on her research that she’s probably aware of when and where. 1200 yrs of manuscripts is a wide range, but in an overview for a group that contained art enthusiasts rather than medieval historians, it was not bad. There was nothing that made me cringe (although I am not a scribe, so it’s really only whatever I’ve gleaned by osmosis from scribes.) It was very well received by the audience (and I managed to mostly keep my mouth shut during question period!)

It was interesting to hear many words I’ve heard before come from someone outside the recreation world. She uses vellum almost exclusively, she works in miniatures, she tends to use watercolour rather than pigments. Her work is beautiful, and any of our scribes could give her a run for her money. We are so spoiled, those of us who receive works of art of love in scroll format. Also, her wee portable palette was terribly clever. Bake some fimo with divots in it into a pretty tin. Done!

Her inspiration piece, what set her off on this tangent was owning an original bit of 16th century manuscript. Unfinished, and beautifully framed, she clearly treated it like the treasure it was. The eye candy was lovely, it was a great little distraction from a crummy week. 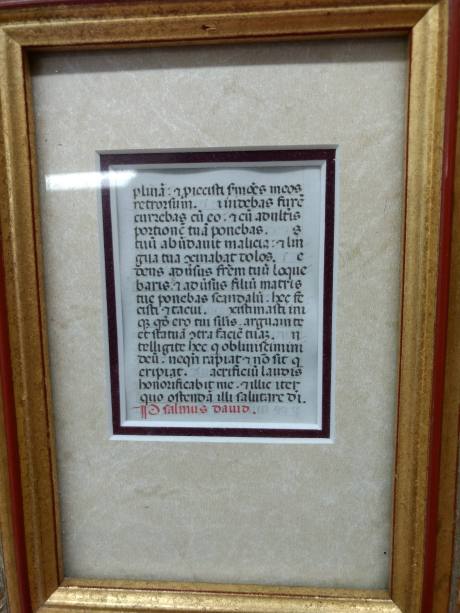